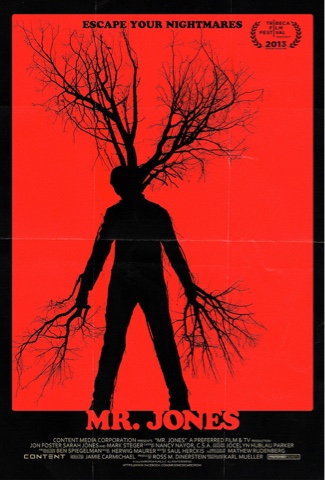 Scott and Penny quit their day jobs and move to a secluded cottage in the country in order to film a nature documentary. Scott soon realizes that maybe he didn't think everything through enough. His dream of filming a documentary is going nowhere fast and Penny is slowly getting angry that he's not working on the documentary.

A strange person starts to show up in the background on some of his shots. Scott and Penny go to investigate the woods and discover that there is a reclusive neighbour that they didn't know about living close by. They sneak into his house when he's not there and find strange sculptures everywhere that resemble scarecrows. Penny recognizes the scarecrows as the artwork of a famous artist named Mr. Jones.

With their new found famous neighbour they switch gears on the film from a nature documentary to a documentary on Mr. Jones. This means the couple needs more photos and film from inside Mr. Jone's house or even an interview. Of course this is when things go off the rails for the couple. Mr. Jones is more trouble than they bargained for.

Mr. Jones is yet another example of the popular Found Footage genre. It seemed like a mix of both Lovely Molly and Blair Witch Project to me. Now, I have to admit I am NOT a fan of the Found Footage genre. The shaky cam is annoying and they always seem to end with someone running and screaming through the woods. Blair Witch already did that years ago. We don't need to see it over and over again! I'm starting to wonder if these films are just cheap to make so they keep rehashing them with the same idea to save money? Besides that it ruins whatever scares there might have been in the movie by trying to make everything seem too "real". This movie wasn't scary at all. It wasn't even creepy!

The basic premise and storyline of Mr. Jones was actually pretty good. I kept watching because I wanted to know more about what the couple found and what would happen to them. I was sucked into the storyline. However, the shaky camera work ruined it for me. It would have been so much better shot as a normal film. It could have become something worth watching again instead of the usual Found Footage crap.

The actors Jon Foster (Scott) and Sarah Jones (Penny) do a fantastic job. Sarah Jones is a real stand out with her character. I would have liked to see something more with her character in the end. I would definitely recommend a viewing of this movie on Netflix. But I think it is just one of those films I will quickly forget about.

Posted by Mary Mourning at 7:20 AM

Email ThisBlogThis!Share to TwitterShare to FacebookShare to Pinterest
Labels: Horror of Netflix, Review

Who is Monster Mary?